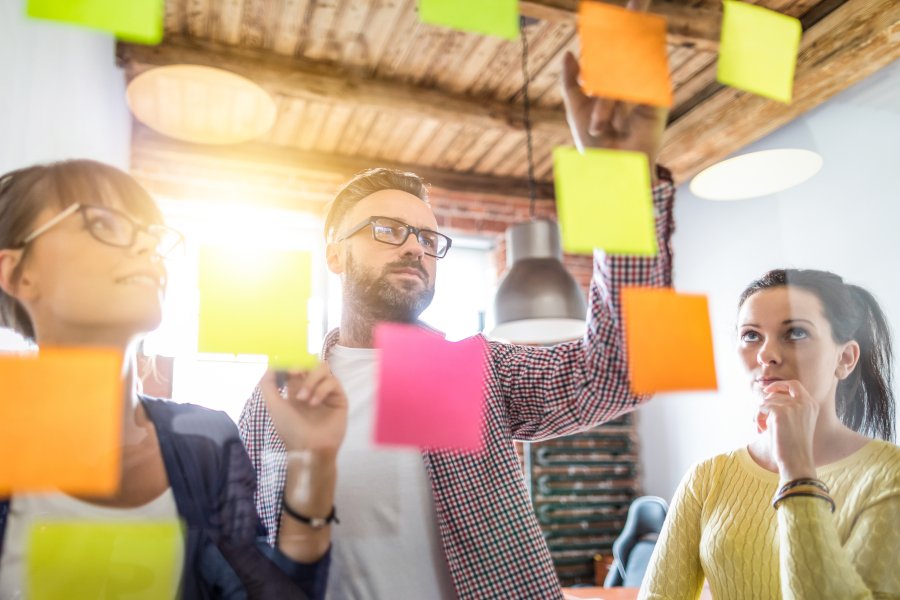 Once you’ve selected your pilot project for your first RPA bot, these are the steps we’ll then take to help you get the most out of your experience working with us::

In order to program the RPA bot, we need to produce a list of manual process steps which includes the software being used, and the data to be extracted, or inputted into the application.

For simple or straight forward processes, a Line-Manager or a SME (Subject Matter Expert) can simply add these steps in a word processer or spreadsheet.

Sometimes though, either the process is complex and has never been documented, or the exact detail of each step needs to be recorded. In these circumstances, there are three main techniques which can help capture this information:

As the name implies, here we capture the process steps on sticky notes, either physically or using an online ‘sticky note’ application such as https://note.ly which is useful if the team is working remotely.

In a group setting, this technique is not only useful for describing the manual process steps, but also allows for discussion amongst the group, perhaps amending the process and even improving the efficiency of the process before automation.

Company employees might think they know the process, however it is not until they start to document it that they realise that extra sub-processes are happening that they didn’t know about, or the sequence they thought was followed is, in fact different.

Sometimes it is useful to record the process and its steps into swim lanes, each lane representing an application or department for instance.

The diagram below shows a Sticky Note Review, with the green sticky notes denoting the swim-lane titles, while the yellow notes are the process steps.

Process Mapping using a Flowchart can be used to formulise the sticky note review above, or if the process is already known, can be used straightway to describe the steps in the process.

There are various tools available to do this, including those within the Microsoft Office Suite. We’ve found that Online tools such as Lucidchart ( https://www.lucidchart.com/pages/ ) or Draw.io (https://drawio-app.com/exploring-bpmn-shape-libraries-in-draw-io )  have additional functionality, making the documentation process easier.

Take a look at our case studies. Each has examples of flowcharts for their RPA automation.

Another powerful way of recording a manual process is making Video/Screen recordings of process activities. The video can then be replayed, and started/stopped to document the various steps in the process.

This is particularly useful where there might be complex business rules within a process, particularly if audio voiceover is added with an explanation of the step.

Processes conducted by remote workers can be captured efficiently with this technique, and makes automation without physically seeing the process in operation possible.

An RPA provider, such as Autane, will take these video/screen recordings of the process and translate them into flowchart steps for the client.

There are various video/screen recording tools available with free versions including Screencast-o-matic (https://screencast-o-matic.com) and Loom (https://www.loom.com/screen-recorder), which also store recordings in the cloud, facilitating the sharing of the video with the Business Analyst.

Other options include PowerPoint which includes a Screen Recorder as standard (https://support.microsoft.com/en-us/office/record-your-screen-in-powerpoint-0b4c3f65-534c-4cf1-9c59-402b6e9d79d0 ).

At a more detailed level, each process can be recorded in a Key Stoke Document. This document lists each process activity by the key strokes, and which buttons are pressed on the keyboard, to complete the process step, together with their respective screen shots.

Sometimes, this is useful for documenting complex activities which might involve the use of hotkeys on the keyboard for instance.

The Process Design Document (PDD) is crucial for documenting the process and importantly communicating the bot requirements to the RPA developer.

It is a confidential specification for the RPA automation and describes everything the developer needs to know for the process to be automated.

This includes the software applications being used, and details of the exceptions that need to be programmed into the robot to handle various process scenarios.

Initially drafts of the PDD might go back and forth between the Business Analyst, and Project Sponser/Subject Matter Expert, while various details are confirmed and amended.

Obviously the more thorough and accurate the document is before development starts, the easier the development process, and more likelihood the bot will run smoothly when it is launched into a production/live environment.

The typical headings for a PDD include:

3. RPA Coding and the Development Process

With regards to the development process from a client point of view, there is little to do, assuming a comprehensive PDD has been written.

Of course, in reality, the developer might still have some areas that need clarifying or clearing up, and they might contact the client periodically during the development process.

Development normally ends with the developer conducting and completing the test schedule. At Autane, the test schedule is sent to the client to confirm that the robot has been programmed and will function in accordance with the specifications laid out in the PDD.

4. Going Live and into ‘Production’

Once the robot has passed its tests and has been developed, it is ready to be eased into production. This is normally split into three short phases as follows:

To handover, some instruction for the end user of the bot might be necessary, and is normally delivered by the Business Analyst. The depth of training/Instruction depends on level of automation and covers the following:

Before putting the bot into regular production, some form of User Acceptance Testing (UAT) will be conducted, where the process owner will test the bot on a small batch of live data, verifying that the output is as expected.

This includes handling and recovering from any exceptions. Sometimes the Business Analyst will be present during UAT, either physically or via Zoom.

If the bot fails at this stage, it’s normally because not all the process scenarios where not captured at the PDD stage, and unexpected exceptions occurred. For instance, during UAT of the Property Management Company RPA Case Study, unexpected popups appeared in the software application for certain scenarios which the Bot was not programmed to deal with and it subsequently failed.

A Bot ‘Fail’ in UAT means the process is passed back to developer for further work. A full ‘Pass’ indicates process has been handed over successfully and the bot is ready for a production launch.

Even after successful UAT, we generally find that a certain amount of ‘Hypercare’ is needed by the development team. What this means is that a developer will watch-over or ‘Babysit’ the first few production runs of the bot, just to double-check nothing has been missed at this stage. Again, if the PDD wasn’t thorough enough, unexpected exceptions might occur which might need further developer work to resolve.

Tags:Process MappingProcess SelectionRobots-As-A-ServiceRPA BabysittingRPA Implementation
We use cookies on our website to give you the most relevant experience by remembering your preferences and repeat visits. By clicking “Accept All”, you consent to the use of ALL the cookies. However, you may visit "Cookie Settings" to provide a controlled consent.
Cookie SettingsAccept All
Manage consent